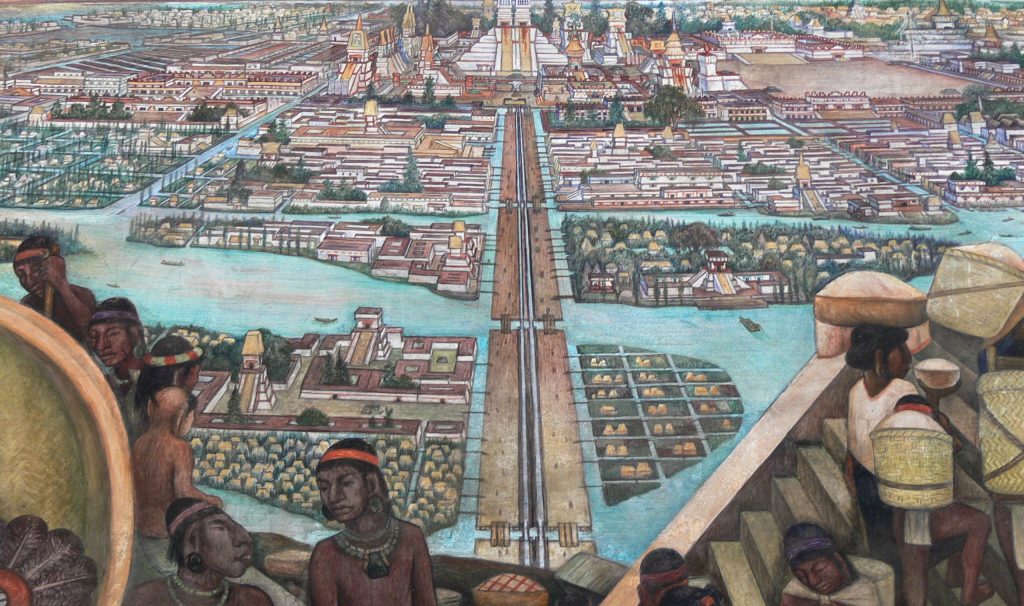 “Soil-free” techniques and fish farming have a long history. The first forms of aquaponics in agriculture for a large-scale farming date back to the Aztecs. Chinampas is the name of Aztec  “floating gardens”, which were artificial islands (stable or sometimes mobile) in shallow waters. The aquaponic system called Chinampas represents one of the most successful cultivation techniques in history, allowing an extraordinary plant production with many harvests per year.
New experimentation with this aquaponic system, carried out in Costa Rica, the United States, and Mexico, confirmed the remarkable advantages of this method of cultivation as compared to traditional farming:

The aquaponic system was also used in the past in southern China and throughout Southeast Asia.
13th Century Chinese agricultural manuals describe floating wooden rafts used to cultivate rice; these techniques were used since the 6th century. Currently, in China, floating aquaponic agriculture is still used for the cultivation of rice and to a lesser degree other crops. Aquaponics is used in ponds with polychrome fish. The aquaponic installations in China exceed 2.5 hectares.

... we develop solutions and technologies to rapidly carry out similar projects:

Beirut is a concrete jungle, with green areas that represent only 3% of the territory, and with roads travelled by very old cars that emit high levels of carbon dioxide. The result is poor air quality, lack of vegetation, and other environmental problems.

The “Wonder Forest” project was born from the original idea of the architect Wassim Melki. It consists in planting trees on the rooftops of almost every building in Beirut, transforming the entire city into a hanging garden. The project involves about 80% of the city’s rooftops (an estimated 15,000 roofs have an adequate area for the project), and it requires the participation of the entire population of Beirut, without which the project would fail. For this reason, there will be incentives for residents, in the form of tax cuts or other benefits, for those who set up and care for a rooftop garden.

This project has many benefits: gardens are inexpensive, easy to maintain, and have many uses. Gardens improve oxygen levels. Moreover, the shade provided by the trees keeps apartments cooler during the warmer months of the year, which, in turn, results in lower energy consumption.

This website uses cookies to improve your experience while you navigate through the website. Out of these, the cookies that are categorized as necessary are stored on your browser as they are essential for the working of basic functionalities of the website. We also use third-party cookies that help us analyze and understand how you use this website. These cookies will be stored in your browser only with your consent. You also have the option to opt-out of these cookies. But opting out of some of these cookies may affect your browsing experience.
Necessary Always Enabled
Necessary cookies are absolutely essential for the website to function properly. This category only includes cookies that ensures basic functionalities and security features of the website. These cookies do not store any personal information.
Non-necessary
Any cookies that may not be particularly necessary for the website to function and is used specifically to collect user personal data via analytics, ads, other embedded contents are termed as non-necessary cookies. It is mandatory to procure user consent prior to running these cookies on your website.
SAVE & ACCEPT